Italy is a peninsula in the shape of a boot which extends down into the central Mediterranean Sea. It is home to nearly 60 million people in the area of the state of Arizona. It shares borders with France, Austria, Switzerland, Slovenia and the city states of the Holy See (Vatican City) and San Marino.

The Kingdom of Italy was proclaimed on 17 March, 1861 and more completely unified in 1870. The Republic of Italy is actually a post-war event which was celebrated on 2 June, 1946. The Italian Constitution was passed on 11 December, 1947 and amended many times. Italy has averaged more than 1 government per year since it became a republic. 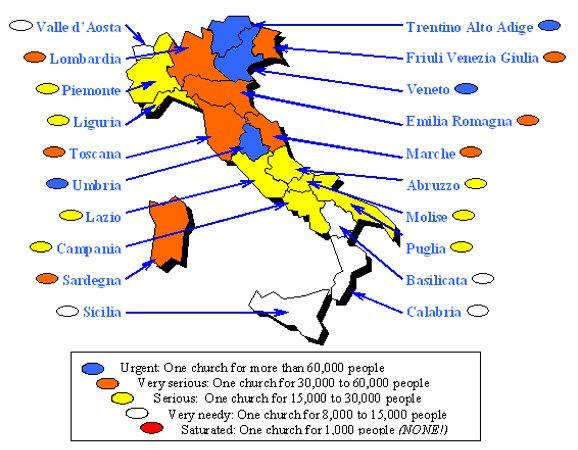 The average protestant church probably has about 40 regular attenders, meets in a rented store front and has no trained or paid leaders. Thousands of Italian communities have never had a protestant church in their history. Many towns in the north are an hour or more away from the nearest protestant church.

The following graphic based on some preliminary research that we have done, shows how many people each little protestant church needs to reach for the Gospel. After looking at this graphic, do you think that more churches might be needed?

Mission For You (Italian)
Questions for Church Planters
Carlson Site